Via the Antarctic to the Nobel Prize

The Konftel 300 played a discreet but key role in the presentation of the Nobel Prizes for physics, chemistry and economics.

Every year, the Royal Swedish Academy of Sciences announces the tightly-kept secret to the world’s media. This year, the winners were notified of the awards via a Konftel 300. They were interviewed by radio and TV stations which were able to broadcast in real time via the conference phone and the PA systems in the assembly hall. “It was sensational and the Royal Swedish Academy of Sciences was enthusiastic in its praise of the sound quality. It went exactly according to plan,” says Roland Fredriksson, Media Producer at Stockholm University’s IT and Media Services Department, which was reponsible for providing the sound technology for this international press conference. “The media greatly appreciated the superior quality of audio that was delivered over the phone.” 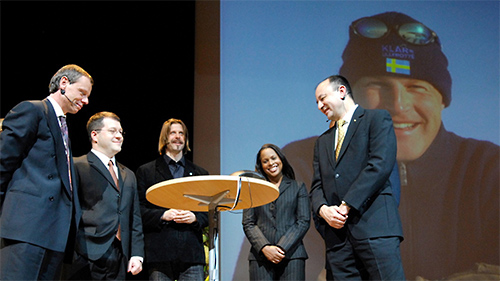 The idea of using a good conference phone was introduced back in 2007 when the crew of the Discovery space shuttle was invited to give a talk in the Aula Magna at Stockholm University. All 1200 tickets to this event had long been sold and the main speaker was naturally the Swedish scientist and astronaut, Christer Fuglesang. During the evening, Fuglesang and his colleagues would talk by phone with scientist Sven Lidström who was at the South Pole searching for elementary particles moving through space.

Roland Fredriksson recalls “I was asked how the direct call could be accomplished, so I contacted Konftel with the question. They produced a solution based on their model of that time and it worked perfectly.”

Praise from the Royal Swedish Academy of Sciences

“When I saw that the new model of the Konftel 300 could be connected directly to a PA system, I suggested the idea to the Royal Swedish Academy of Sciences for the presentation of the 2009 Nobel Prize. It was a huge success. It was easier to use than the previous hybrid telephones and delivered much better sound quality. Professor Gunnar Öqvist, who is Permanent Secretary at the Royal Academy, praised us highly. He said it was technically the best presentation of the Nobel Prize winners to date and by far the best sound.” 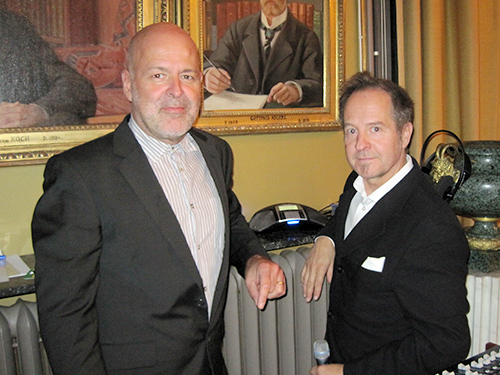 Questions from the audience

Roland Fredriksson and his colleague Henrik Nordgren (photo on the right) had connected the Konftel 300 via a mixer to the hall’s PA system for the press conferences. Two hand-held microphones were connected to allow questions to be taken from the audience and journalists, and professor Öqvist and the other experts on the podium wore head microphones. The sound from the Konftel 300 was linked directly to the TV and radio companies’ broadcasting buses. Some of the companies recorded the sound directly into their cameras for editing later.

“It’s the perfect set-up for events where some of the participants are elsewhere but are a central part of the event or press conference. It brings the world to your doorstep and there’s a feeling of virtual presence. It was amazing being there when the Nobel Prize winners were linked up to the hall. Extremely effective and highly appreciated by the journalists and the Royal Academy’s press organisers,” Roland Fredriksson says.

Stockholm University, IT and Media Services Department
The IT and Media Services Department supports the core activities of Stockholm University by creating good conditions for the use of IT in studies and research. The Department is also responsible for the University’s IT infrastructure. This includes networks for data communication and telephony. The Royal Swedish Academy of Sciences draws on the experience and services of the Department on various occasions, including the annual presentation of the award winners of the Nobel Prizes for physics, chemistry and economics.
Download the document

The Swedish truck manufacturer, Scania, has a workforce of about 39,000 employees and operations in more than...

Professional conferences with clients and suppliers

The audio quality, user-friendliness and design of the Konftel 300 impress the German booth constructor...