The Swedish truck manufacturer, Scania, has a workforce of about 39,000 employees and operations in more than 100 countries.
"Efficient virtual meetings are important to our way of working, in both our production processes and other business activities. Our demands for performance and quality are therefore high when it comes to communication solutions," says Robert Beiron, Global Manager for Scania's telephony services.

The telephony system that Scania has installed in Sweden and several other European countries has been completely IP-based for some time now.

"The Scania Production System, which can be compared with the Lean principles, means that we are continuously working towards the elimination of waste and building an approach to accountability that is smart and decentralised. Key to this is ensuring that everyone is well informed, which is why we have special meeting rooms in the production facilities equipped with Konftel conference phones and microphones suspended from the ceilings. This allows us to hold quick, daily, stand-up meetings where we can bring each other up to speed on what's happening in the facility and between the various departments and plants around the world," Robert Beiron explains. 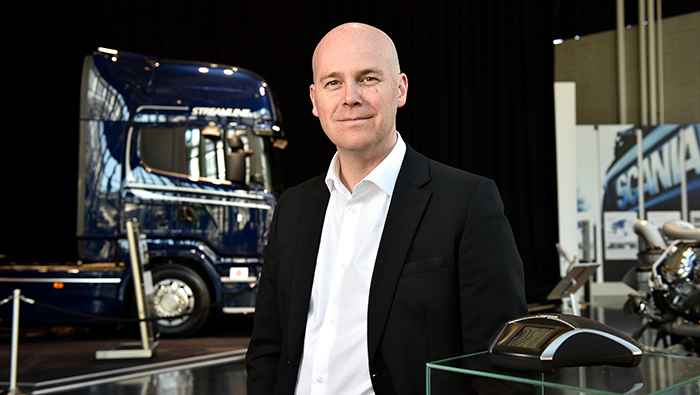 "Konftel has a versatile range of models that are a good match for our IP-based telephony system." Robert Beiron, Global Manager for Scania's telephony services.

In production areas and offices

Scania's production areas and office spaces have been designed to enable meetings to be conducted simply and efficiently. 40 per cent of the 11,000 people employed at Södertälje work in areas other than actual production.

"We work in open-plan offices with access to lots of quiet rooms and small and large conference rooms where we can hold meetings. These are equipped with Konftel devices, which means you can launch straight into a remote meeting with as many attendees as you like. I've no idea how many remote meetings take place every day, but as they are an integral part of Scania's way of working, they're going on pretty much all the time. We use different models of Konftel conference phones based on local needs," Robert Beiron says.

Scania has a strict travel policy. Alternatives to travel must be used first. As well as the cost-saving aspects, there are benefits to employees as they are not wasting time travelling and are closer to home at the end of the day. Use of Lync for meetings is rapidly growing. There is less risk of misunderstanding if the image on everyone's screen is the same.

"The whole point is being able to share documents. Discussing a presentation or document is much simpler when everyone is looking at the same thing. However, we rarely use the camera to transmit live images in real time. It uses too much bandwidth and slows the overall transmission speed. Sitting looking at one another during a meeting doesn't serve much of a practical purpose either."

A Konftel is connected during Lync meetings to enhance the quality of the audio. Meetings with attendees from Hong Kong, Kolar in India and Södertälje in Sweden, for example, can pose some linguistic challenges and that's why it's extremely important to ensure superior audio quality. Remote meetings via Lync can be compared to regular conference telephone meetings, plus you have the computer as a fast source of images.

"In conclusion, you could say that efficient and effective meetings are part of everyday life for most people at Scania. Our technological solutions are highly streamlined and we give thorough consideration to changes before implementation. There's no time for technical problems. We expect everything to work exactly as it should when the operators push the button," Robert Beiron comments.

Important for Scania:
• Simple integration between IP systemsand other equipment
• Quick start-up and easy operation
• Superior audio quality because of large distances and different languages
• Ability to share technical specifications and other documents

About Scania
Scania was founded in 1891 and is one of the world's leading manufacturers of heavy trucks. Scania is represented on all continents. The company has some 39,000 employees across the world. Its largest facilities are located at Södertälje (Sweden) and São Bernardo do Campo (Brazil). Scania is best known for its heavy trucks weighing over 16 tonnes. It also manufactures buses and marine and industrial engines, and provides service and financing solutions. The company's head office and development centre are located in Södertälje. Scania is a public limited company whose shares are listed on the Stockholm Stock Exchange. It has production facilities in Sweden (Södertälje, Oskarshamn, Luleå) and Argentina. Its truck assembly plants are located in Södertälje, Angers (France), Zwolle (the Netherlands), St Petersburg (Russia) and São Bernardo do Campo (Brazil). For more information, please visit: www.scania.com
Download the document

AGRAVIS Raiffeisen AG is an agricultural trade and service company with a total of 300 offices across northern...