There are certainly lots of big companies in the world with multiple meeting rooms requiring conferencing technology. And then there’s New York-based WeWork, whose very business is to provide collaboration space for its half-million-plus members in more than 150 cities across six continents. To do so, WeWork maintains a stockpile of roughly 10,000 wireless, IP-based Konftel 300Wx conference phones that are easy for people to use and for WeWork staff to maintain.

“Globally, we have more than 16,000 conference rooms,” explains Nick Nienaber, Head of Audiovisual at WeWork. “For those rooms where we offer members communication technology, we ended up having pretty specific needs, and Konftel has been an incredible partner in providing the right solution.”

“The WeWork team is passionate about getting the technology right for its members,” says Tommy Edlund, Konftel Global Sales Director. “As an organization, it’s at the forefront of collaboration, digital transformation, and helping drive workplace productivity and innovation.”

Locations are managed by local staff, who need to ensure the available technology is ready and operational each time a WeWork member wants to use a space. In the beginning, the company had a small team dedicated to deploying and supporting technology, which made offering communication devices a challenge.

Early attempts to offer other companies’ conference phones in WeWork’s coworking facilities hit various snags. Some members would unplug them from the wall to access power for other use, or they’d disconnect the network cable. Depending on the size of the room, others just wanted to move the phones around freely.

“The members were decommissioning the devices for the next member who might want to use that conference room,” says Ofir Hirak, Director of Technology for WeWork. “This presented a big IT hurdle.”

Then one day, Hirak remembers being pulled out of a meeting to preview a new conferencing solution from Konftel. It was wireless—both in terms of power and networking—and communicated via IP, which dovetailed with the company’s adoption of VoIP services to its locations. Moreover, it was aesthetically in-line with WeWork’s identity as a modern startup serving a largely tech-savvy clientele.

The benefits of the Konftel 300Wx proved extremely practical, too.

Wireless HD Performance the Lasts a Week or More

The Konftel 300Wx wireless conference phone includes the “futuristic” unit itself plus a charging cradle and a SIP-compliant Konftel IP DECT base station for enabling cordless communication from the conference phone to the physical IP network. The DECT standard (Digital Enhanced Cordless Telecommunications) is used widely around the world and doesn’t interfere with other wireless technologies in common use, such as Wi-Fi and Bluetooth. This was important to WeWork because it employs a global technology standard across the vast majority of its more than 800 locations.

Early on, it was clear that not every WeWork conference room required a conferencing phone. Usage data from its VoIP providers helped the technology team identify how many rooms needed to offer communication capabilities and therefore how many 300Wx solutions Konftel would deliver.

“All told, WeWork has been the biggest end user project in North America we’ve collaborated on,” says Edlund. “WeWork adopted the Konftel 300Wx across its conference rooms based on its design, wireless capabilities, performance, and ease-of-use.” 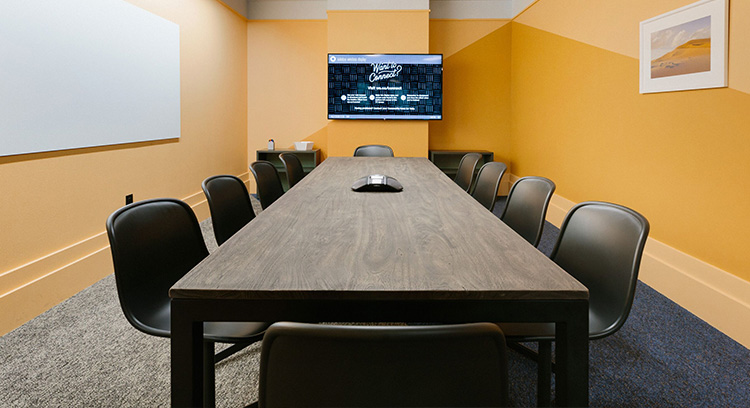 Each Konftel solution incorporates the company’s OmniSound audio technology and support for wireless HD calls, resulting in clear, natural-sounding communication. The Konftel 300Wx can support meetings of up to 20 people, and the wireless conference phones themselves last up to 60 hours per charge (270 hours in standby)—a huge benefit for the WeWork staff who need to make sure the phones are ready each time a conference room is in use. In each WeWork conference room, the Konftel 300Wx phone and charger are set out for members’ use, while the Konftel IP DECT sits in a box behind the room’s display along with other AV equipment.

“Rooms can be serviced and managed individually, so you don't have to worry about one rack of devices or chargers, which was really good for us,” Nienaber says.
The 60-hour battery life helps, especially when members forget to put the Konftel conference phones back with their chargers. “We don’t keep the phones and chargers centralized and don’t always have somebody doing sweeps to make sure they’re charged at the end of every day, so the phones sometimes get left on the table,” Nienaber says.

Overall, for a fast-growing company supporting conference spaces around the world, the Konftel 300Wx wireless solution was a great fit.

“The simplicity of rolling it out alongside the rest of our AV gear had a lot to do with why it became a standard and why we put it pretty much everywhere,” explains Nienaber.

WeWork continues to work with Konftel, not only in support of its existing conferencing technology, but also as it looks to the future. For example, explains Hirak, when WeWork wanted to disable a feature of the Konftel phones that could allow members to record calls, Konftel engineers quickly developed a firmware update. When WeWork explored new VoIP providers in certain markets, Konftel engineers helped with that firmware change, too. And because the Konftel 300Wx is upgradable via SD memory card, WeWork staff could easily administer the software changes.

“We were able to mail SD cards to the sites and community managers were able to pop them in, push a couple of buttons, and the phones were up and running on a new VoIP platform in a couple of minutes,” Hirak says.

Looking ahead, WeWork is exploring ways to offer more video conferencing capabilities to its members. The challenges are less technical—Konftel solutions, including cameras, already support the breadth of popular video collaboration platforms—than logistic. Not only must a WeWork conference room solution support all the video platforms members might prefer, but it must also be able to seamlessly change from Google Hangouts for one meeting to Zoom for another, for instance, as members take turns using the WeWork space.

“WeWork’s conferencing needs are pretty unique, especially when it comes to eventually implementing video,” concludes Nienaber. “Konftel has been proactive about showing us new things. We’re very much on the same wavelength when it comes to what is important to our members.”

Important for WeWork
To provide high quality meeting room conferencing to its half-million-plus members in more than 150 cities. WeWork maintains a stockpile of around 10,000 Konftel devices that are easy for people to use and for WeWork staff to maintain – featuring long battery life.
About WeWork
WeWork was founded in 2010 with the vision to create environments where people and companies come together and do their best work. Since opening its first location in New York City, the company has grown into a workplace provider committed to delivering flexible, inspiring and safety-focused spaces on a global scale.